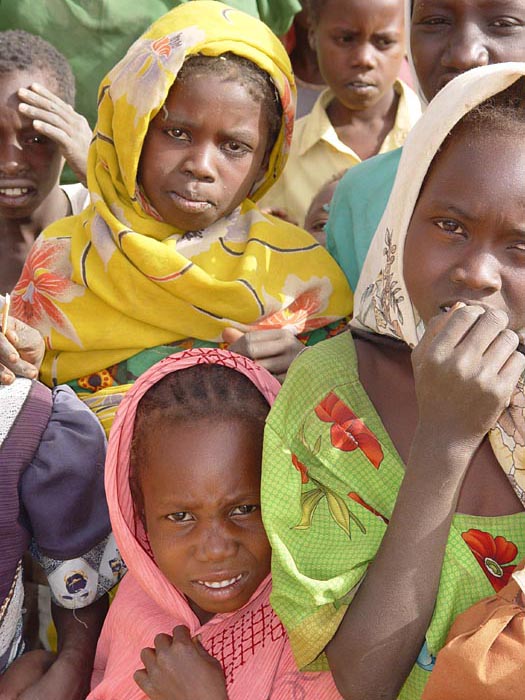 Genocide is raging in . The Government of Sudan (GOS) and Arab militias the GOS supports are killing Sudanese black Africans of all ages simply because of their ethnic identities.  Nearly every black African village in has now been destroyed.  The GOS intends to crush black African rebel groups and to rid of black Africans once and for all. The estimates of deaths in now range between 100,000 and 350,000. While the international community frets, makes idle threats (such as sanctions that are never imposed), and engages in talk about whether this is really genocide and  what should be done, hundreds of innocent victims continue to die daily.  Meanwhile GOS troops and their Arab militia allies (known as the Janjaweed or devils on horseback) attack, rape and murder with impunity.

We, Samuel Totten and Eric Markusen, feel a particular sense of responsibility because, as members of the Atrocities Documentation Team sent by the U.S. Government to the Chad/Sudan border to investigate allegations of genocide, we personally witnessed the suffering of refugees and listened to their heartbreaking stories of being raped, injured, losing loved ones to mass murder, and facing disease and hunger.

In her Pulitzer-prize winning book, "A Problem from Hell": in the Age of Genocide, Samantha Power surmises that

The real reason the did not do what it could and should have done to stop genocide [in the past] was not a lack of knowledge or influence but a lack of will. Simply put, American leaders did not act because they did not want to...
The executive branch has felt no pressure from the home front. American leaders have been able to persist in turning away because genocide in distant lands has not captivated senators, congressional caucuses, lobbyists, elite opinion stop genocide has thus been repeatedly lost in the realm of domestic politics. Although isolated voices have protested the slaughter, Americans outside the executive branch were largely mute when it mattered. As a result of this society-wide silence, officials at all levels of governments calculated that the political costs of getting involved in stopping genocide far exceeded the costs of remaining uniformed. ...It takes political pressure to put genocide on the map in Washington [D.C.]. When Alison Des Forges of Human Rights Watch met with two weeks into the genocide, he informed her that the phones were not ringing. "Make more noise!" he urged. Because so little noise has been made about genocide, decision-makers have opposed intervention, telling themselves that they were doing all the could  --  and , most important, all they should --  in light of competing American interests and a highly circumscribed understanding of what was domestically "possible" for the  to do (pp. 508-509).

In the same book, Power reported the following  -- and we think, revelatory  -- statement:

Senator Paul Simon (D.Ill.) [now deceased], chairman of the Senate Foreign Relations Subcommittee believes public pressure might have alerted the response [to the outbreak  of the Rwandan genocide in 1994]. "If every member of the [] House of Representatives and [] Senate had received 100 letters from people back home saying we have to do something about , when the crisis was first developing then I think the response would have been different" (p. 377).

THE ACTIONS WE URGE YOU TO TAKE

With ever fiber of our being, we urge every person who receives this message or reads it on this website to take action as follows:

Simply write a short note to your U.S. Representative and your Senators and e-mail it to each of them. The note can be as simple as "I implore you to act to stop the genocide in , and to do so now.  Please send a copy of your e-mails to Samuel Totten at stotten@uark.edu so we can keep track of how many e-mails are sent.

You can easily obtain the addresses of your representative and senators by using the search engine: www.congress.org  When you reach the website, simply type in your zip code and you will be given names and e-mail addresses.  For postal address, phone, and fax numbers, just click on more info.

We also ask that you consider sending a copy of your letter to President Bush at president@whitehouse.gov , to Secretary of State Condolezza Rice at this recommended State Department webpage,  to United Nations High Commissioner for Human Rights Louise Arbour at tb-petitions@ohchr.org , to United Nations Secretary General Kofi Annan at sg@un.org and to his Special Adviser on the Prevention of Genocide, Juan Mendez at mendez7@un.org

As with your letters to elected officials, please send copies to Samuel Totten at stotten@uark.edu.

On behalf of the dead and dying of , we thank you.